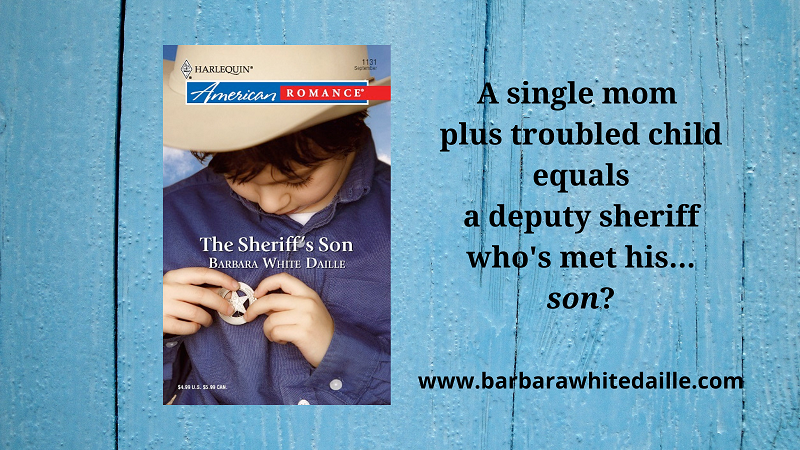 Today I’m sharing a snippet from The Sheriff’s Son, which was my first published book. Set in the fictional town of Dillon, Texas, it features Sarah Lindstrom, a struggling bookstore owner and single mom; her trouble-seeking seven-year-old; and Tanner Jones, the new deputy sheriff in town – who, unfortunately, is not new at all to Sarah:

Tanner reached out for her.

She froze and stared at him, so close he could see a tiny nerve flicker in one cheek. So still he could feel a much stronger pulse in her wrist.

He scanned her from head to toe. Her eyes, calm and green; her long, uptight braid; her tall, slim but curvy body, dressed in the same flower-print dress she’d worn that afternoon.

Imagination took over and he saw those eyes flashing, that braid loosened, that dress a pile of petals on the floor.

As if she read something in him, she pulled her arm away and stepped back. “We’d best get along to the refreshment table, or you’ll miss out.”

“Nah.” He cleared his throat. “Looks like I’ll be around awhile. You can make me a pecan loaf all to myself.”

“And you can make an appointment with Doc right now. To get some medicine for your delusions.”

He grinned. “Can’t deny it, Sarah, we’ll be seeing a lot of each other.”

“Only until we figure out what’s going on around town.” Her eyes flashed for real, this time. “So don’t go getting any ideas, Deputy.”

Find The Sheriff’s Son at major booksellers, including:

Thanks for stopping by the blog!