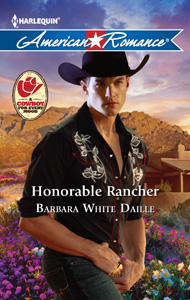 Update:
Re-release news – included in a 2-in-1 anthology called
In the Rancher’s Care (February 2015)

A tear sparkled at the corner of Dana’s eye.

Missing the chance to catch a handful of flowers couldn’t upset her that much. Ben knew what she really missed—having a husband by her side. Her husband.

But neither of them would have Paul back in their lives.

Before he could get to his feet, she left, running away like that princess in the fairytale his niece asked him to read to her over and over again.

No, not a princess. The one who took off without her glass slipper—Cinderella.

Dana was no Cinderella. She hadn’t left a shoe behind. Hadn’t even dropped a button from that pink dress as something for him to remember her by. As if he could ever forget her.

She’d been the heroine of a story he’d once created long ago, a story he’d had to write in his head because he hadn’t yet known how to spell all the words.

How did it go? Like in his niece’s storybook…

Once upon a time, that was it.

Once upon a time, in the Land of Enchantment—otherwise known as the state of New Mexico—Benjamin Franklin Sawyer had high hopes and a huge crush on the girl who sat one desk over from him in their classroom every day.

No other girl in town, Ben felt sure, could beat Dana Smith, and most likely no other woman in the world could compare to her, either. In any case, without a doubt, she was the cutest of all his female friends in their kindergarten classroom.

Unfortunately, when the teacher moved his best friend, Paul Wright, to the desk on the other side of Dana’s, Ben saw his hopes dashed.

The crush, however, continued. For a good long while.

As for Benjamin Franklin Sawyer’s hopes…

Well, not every story had a happy ending.

Since Paul’s death, they had seen less and less of each other. By her choice, not his own.

She needed time, he had told himself. Needed space. So he’d waited. He’d talked himself down. He’d exercised every horse in his stable enough to cover every inch of the land he owned. When none of that worked, he’d bought the danged office building. And even that hadn’t brought him peace.

Seeing her now had.

He never could stand to watch her cry, but tonight, he welcomed those tears in her eyes and the way she’d hurried away from him. Doing fine, she’d said. Like hell. Her actions revealed more than she would willingly tell him. More than she’d ever want him to know.

She needed his help, though she refused to accept it.

The help he had promised Paul he would give her.

“Daille packs an incredible amount of story into 200 pages—story, emotion and heart….Daille’s prose is as vibrant as her storytelling….”

– Kathy, USA TODAY/Happy Ever After