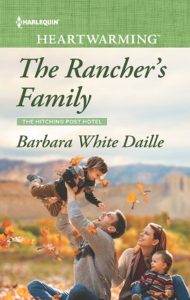 She certainly hopes so…

After a devastating loss, Cara Leonetti’s dreams of a husband and children are on hold. But Cowboy Creek’s local matchmaker thinks otherwise! And Cara finds herself unexpectedly entangled in the day-to-day family chaos of widower Wes Daniels and his two small children. She’s falling hard, but the strong, silent rancher doesn’t trust in love. Can Cara put her own fears aside and show Wes that they’re stronger together?

Cara braked to a stop next to a pickup truck needing a good wash.

This late in the day, with the sun melting on the horizon, a few lights shone through the curtained windows of the house. She pushed the doorbell and listened to the chimes ring, then fade, as she glanced around her.

A thick layer of dust covered the porch swing. In one corner of the front window, the fine strands of a cobweb turned golden from the light shining through the panes.

Her heart went out to the widower who lived here. Obviously, the man had no housekeeper and now no wife to help him with all the little chores that made this house their home. Or else he couldn’t summon the energy to worry about those things once he lost the person who meant everything to him.

She looked at her car only a few yards away. Maybe she should get in it again and leave. Maybe Wes Daniels had decided he didn’t want help.

And after all, who was she to come here and disturb a stranger still so wrapped up in grief that he might wind up a hermit, as Jed had put it?

A man stood in the opening, silhouetted by the light from a lamp in the room behind him. Not Jed’s “old friend.” A much younger man, twentysomething, with broad shoulders and sturdy arms and dark brown eyes beneath dark brows. A man she already…sort of…knew.

The unfriendly cowboy she had met that afternoon at the Big Dipper.

He looked just as surprised to see her. “Did you make a wrong turn on your way to somewhere else?”

A point in his favor—he’d remembered her telling him where she was from. He seemed more relaxed than he had earlier. Maybe he’d just been in a bad mood. Or—be honest—maybe her own stress had led her to misread the situation, and the awkwardness was all on her.

Then and now. “Well, I’m…” Nerves suddenly stole her power of speech, but that had nothing to do with the man in front of her. She wasn’t worrying over hurting a stranger. Instead she was anticipating what was coming next—being reminded of her own loss and reliving her own grief.