A Rancher of Her Own
The Hitching Post Hotel, Book Two
July 2015 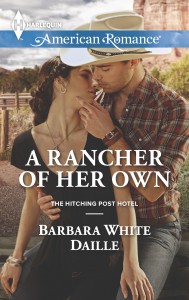 A REASON TO STAY

Ranch manager Pete Brannigan has no interest in playing tour guide to a city slicker like Jane Garland. But spending a few days with the headstrong photographer is a small price to pay for everything her grandfather has given the single dad. Though Pete’s drawn to Jane’s sharp wit and striking beauty, he won’t hurt his young children by falling for another woman who puts her career before family.

Jane’s seen the world through her camera…and used it to shield her emotions. With Pete, she can finally let her guard down. If only he could do the same. Despite their powerful bond, Pete still can’t trust Jane with his kids or his heart. But if he keeps pushing her away, he may ruin any chance their relationship has to develop.

“The second in The Hitching Post Hotel miniseries has Grandpa Jed once again exercising his matchmaking skills. This time, he’s going to need some help with this stubborn pair. This slow-burning romance with an antagonistic edge addresses love, loss and learning to forgive.”

Excerpt from A Rancher of Her Own:

“That sounds a few steps down from ‘pretty.’”

He laughed softly. “So, you did hear what Rachel and I said. Hoping to catch more compliments?”

“Maybe. Have I brought the right bait?”

“Maybe. Let’s try it and see.” He ran his hand up her arm, then to her shoulder. With one finger, he stroked the skin left exposed at the neckline of her dress, setting off ripples of pleasure inside her. “Smooth,” he murmured.

He palmed the side of her neck, his long fingers tunneling into her hair, his thumb brushing her cheek. “Soft,” he said.

“Trying to win me over with compliments, cowboy?”

“Maybe.” He tilted her chin up and lowered his head, touched his lips all too briefly to hers. “Sweet,” he said against her mouth.

He slipped his hand to the back of her head and held her still as he kissed her, fully, completely, leaving behind the faintest flavor of good champagne. Leaving her tingling all over.

If he only knew. “Is that another compliment for me,” she murmured, “or a commentary on your technique?”

Smiling, he shrugged. “I’ll let you be the judge of that.”

He slid his arm around her, pulling her close.