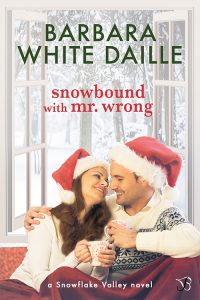 Worst. Day. Ever. After Lyssa Barnett’s sister tricks her into reprising her role at Snowflake Valley’s annual children’s party, she doesn’t think anything can be worse than squeezing into her too-small elf costume. Then tall, dark, and way too handsome Nick Tavlock shows up to play Santa…and an unexpected storm leaves them snowbound in the isolated lodge.

The last thing Nick wants is to spend a cozy Christmas Eve with a trio of kids and the woman who dumped him. But as much as Lyssa frustrates him, he can’t stop thinking about her. And soon, he’s fighting very un-Santa-like thoughts of kissing a certain sexy Miss Elf under the mistletoe. As Nick starts to fall for Lyssa all over again, he knows it will take nothing short of a miracle to have Lyssa in his arms on Christmas Day.

Lyssa could so easily see Nick with children of his own…and hers… But she had already decided there was no point in dreaming about a future with him. Considering his single-minded focus on work, he could never be the man for her.

She got to her feet and, forcing a smile, said, “I think it’s time for some hot chocolate.”

Four voices rose in agreement, and she escaped gratefully to the kitchen. The more she saw of Nick connecting with the kids, the harder it was for her to watch and the more she wanted to stay away. Yet she knew this trip to the kitchen was only a temporary reprieve.

She just hadn’t realized how temporary.

She had barely started heating the milk in a pan on the stove when Nick entered the kitchen. He came to lean against the counter beside her. “Need something?” she asked brightly.

“Yeah. To tell you I forgot how much fun it is being around you. It’s been a great afternoon.”

She flushed. “No thanks to me. That’s all on the kids. They’re quite a bunch.”

“And you’re quite a woman.”

He reached up and touched his finger to her lips. “Don’t do that, Lyssa. Don’t sell yourself short.” He moved his hand to trace her chin. A shiver tickled along her jaw. “You know what else I need?”

He leaned down and brushed his mouth against hers. He tasted so like the man she had fallen for months ago. His kiss was so tender, so sweet, she couldn’t help but want more. Another thought hovered at the edges of her mind, a thought she felt sure she didn’t want to know. Not now. Not here. Not when his taste and his touch and his total concentration on her were all exactly what she needed.

One dizzying kiss led to another and then another, until she had to curl her fingers in the fabric of his T-shirt to keep herself standing upright. But finally she forced herself to come to her senses. She tilted her head back and whispered, “Stop.”

“What would we say if one of the kids walked in?”

“That the chocolate will be ready as soon as I’m done kissing the cook.”

Read Chapter One
and find links to your favorite e-tailers