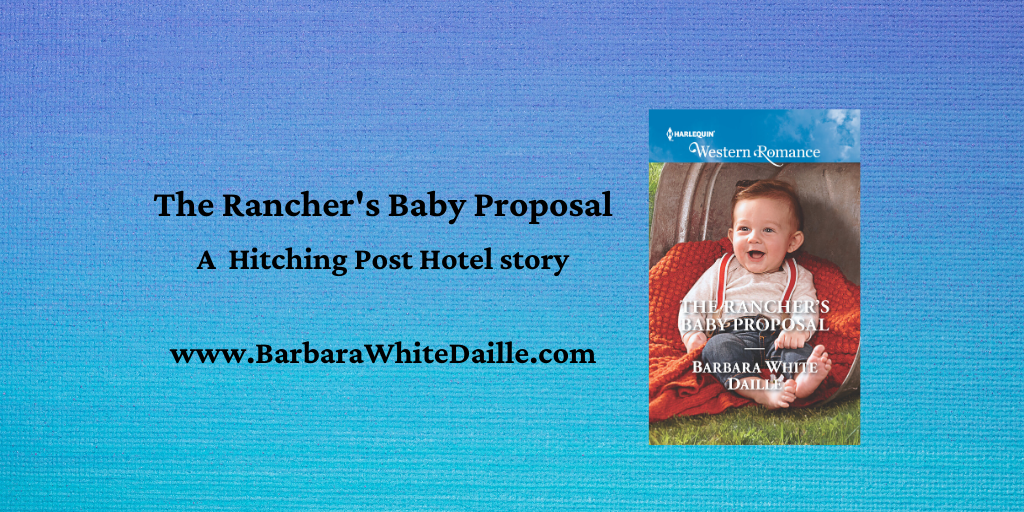 Today’s post shares an excerpt from one of my Hitching Post Hotel books, The Rancher’s Baby Proposal. (The first and second installments are in the previous two posts.) Ally’s high school crush has returned to town, and she’s thrilled when he invites her to meet him at the local sandwich shop…until she finds herself in big trouble:

“I’ll pay you whatever it is you make hourly at the store,” Reagan continued.

I don’t want your money.

But how could she say that? He would find it highly suspicious, especially since she had said she could use the extra cash. And she couldn’t confess to him that minding his baby scared the heck out of her.

Not meeting his eyes, she sipped her tea and then touched the paper napkin to her lips.

She thought of all the years she had crushed on Reagan. Everyone in school probably knew how she felt about him. He must have known it, too. He couldn’t have missed it…could he? Now the idea made her cringe. If he had noticed, she couldn’t risk saying something that would make him recall how much she had liked him…and maybe make him change his mind about asking for her help.

Worse, if she didn’t guard her reactions now, he would find out how much she still cared.

“You’d…want me to take the baby home with me until you pick him up?” That would work. Mama could help her with him.

“He’ll be fine with Mrs. B all day, I know that. But his routine will already be upset enough since he won’t be with his regular sitter. I’d rather you bring him out to the ranch and watch him there, if that’s not a problem for you.”

She was stuck between a rock and a hard place, as Jed Garland would say. She would go out to Reagan’s family home to spend afternoons and evenings with him…and a baby she had no idea how to handle.

From the cover of The Rancher’s Baby Proposal:

Ally Martinez has always been known as a fun and flirty kind of gal.  But deep down she’s never forgotten the cowboy who left town. When her crush Reagan Chase comes home after a five-year absence, Ally knows this is her big chance. The guy I’ve always wanted. Only Reagan has something different in mind…

Thanks for dropping by the blog!