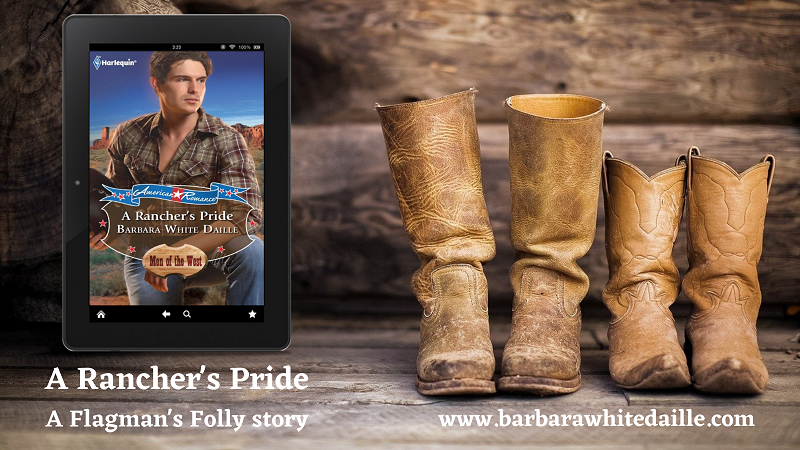 With today’s peek at A Rancher’s Pride, I’m sharing the cover blurb first so you’ll get to know the players:

Sam Robertson’s life just changed. In one short day, he found out that he’s a daddy; that his beautiful little girl, Becky, is deaf; and that her aunt, sign language teacher Kayla Ward, intends to fight him for custody.

There are plenty of reasons Sam shouldn’t fall for Kayla. A city girl like her has no place on his ranch, particularly when she’s his ex-wife’s gorgeous sister. But thanks to the judge’s orders, Sam’s spending a lot of time with Kayla, trying to give Becky the stable home she’s never known.

Despite their ongoing custody battle, Sam and Kayla’s love for Becky brings them closer than they ever expected, and Sam knows that no matter who wins in court, he could still lose—Kayla or his daughter.

The excerpt in last week’s Snippet Sunday post comes just before this one in the book. If you’d like a peek at that first, click here.

And now for today’s clip:

Becky came around the corner of the house dragging her toy-filled wagon. When she saw Sam, she grinned and waved.

A minute later, she bounded onto the porch, a doll and a plastic bottle in her hands. He ruffled her baby-soft blonde hair.

When Sharleen patted the empty seat beside her, Becky climbed up onto the bench and settled herself with her toys. Once she’d caught the child’s attention again, Sharleen cupped her hand and ran her fingertips down her stomach. “Is the baby hungry?”

Sam looked at his mother in surprise. “How did you learn that?”

“At first, just from watching. Kayla always tells me what she’s saying to Becky. Then I asked her a few other words. She was nice about showing me, too.”

If only things could be that easy.

Holding back a sigh of frustration, he recalled the day he’d met Kayla and Becky at the Double S for lunch. Before heading to the café, he’d stopped at the bookstore to pick up the dictionary he’d had to special-order. The book that showed the basics of sign language. The one he thumbed through night after night when everyone else in the house had gone to bed.

He had bought that dictionary feeling confident he could solve his problem on his own. But he’d soon found that talking with his hands would be a lot harder than he’d thought.

Sharleen frowned, squinting up at him, uncertainty in her eyes. “Sam, I can’t say anything against Kayla when it comes to Becky. She loves the child.”

He couldn’t deny that. But when he tried to agree, the words stuck in his throat.

He had told her about Judge Baylor’s decision of leaving Becky in joint custody for six weeks. Sam couldn’t do a thing to get that changed until his ex surfaced. And so far, no one had seen or heard from her.

“We can’t lose Becky.”  Sharleen looked down again at her granddaughter—the only grandchild she’d ever have.

The only child he’d ever have, too.

“If Lloyd decides in Kayla’s favor, we will.”

“Sam, Lloyd was a good friend to your daddy, and he’s always been good to us, but I’m afraid…”

Afraid your history with the judge will hurt us.

She didn’t need to say the words aloud.

By the time he left the porch, he had succeeded in calming her fears. He’d made her believe everything would work out.

He just wished he could believe it, too.