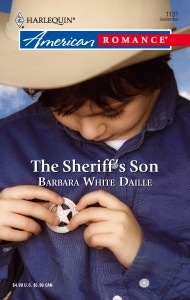 What she wouldn’t do for some matches or a fireplace.  But the only bookstore in Dillon, Texas, wasn’t the place to find either of those things, even if she were dumb enough to resort to drastic measures.  Burning the bills would only add to her problems, not solve them.

The thought of her son made her sigh again.  It was only a few weeks into the new school year, and in that short time, he’d given her more grief than in all seven years of his life combined.

At the sound of the bell over the door, she glanced at the clock.  The Bookies had arrived a bit early.

She smoothed the loose curls escaping from her braid, ran a hand over the front of her dress and smiled.  Nowadays, besides reading, her only form of entertainment came from The Book Cellar’s novel discussion group, an assortment of local women ranging from former schoolteachers to ranch wives to several of her own stay-at-home-mom friends.

Halfway through the office doorway into the large, overflowing bookstore, she froze.  Her mouth hung open, the greeting she’d intended to call out shriveling on her tongue, sliding back down her throat, curdling in her stomach.

Tanner Jones seemed to fill her vision, standing taller and more broad-shouldered than she ever remembered, but looking, unfortunately, all too familiar.  Except for the deputy sheriff’s badge decorating his chest and the gun resting on his hip.

The man she’d once loved.  Once lost.  And never wanted to see again.

Her stomach dropped.  His voice had deepened with the years, but his once well-loved drawl triggered a fully-illustrated volume of unwanted memories.

Sarah focused instead on Kevin, whose yelp revealed much more than his missing front tooth.  What had he done?  And why did Tanner have to be the one to catch him?

“Put him down this instant.”

He laughed.  “C’mon, Sarah, I outgrew that tone in grade school with Mrs. G.”  He lifted an eyebrow.  “Don’t you think you ought to hear what happened first?”

“No.  First, I think you ought to unhand my son.”  Her voice wobbled.  She took a deep breath.  She had to be strong for Kevin.  They had no one else but each other.  “Let him go, then we’ll talk.”

To her relief, Tanner shrugged and released his hold on the T-shirt.  Kevin’s heels dropped to the floor.

“Mom!”  He rushed across the room to wrap his arms around her waist and bury his face against her.

“It’s all right.”  She kept a reassuring arm around him but shifted him to her side so they could face the enemy together.

Normally, she had a healthy respect for the law.  But this was Tanner Jones, and that made all the difference.  “What happened, Kevin?”

Tanner whipped a leather-covered notebook out of his pocket.  As he started toward them, her son trembled against her.

Tanner snorted.  “You call defacing a sheriff’s car nothing?”

The bell over the front door rang again, and Kevin’s friend Billy poked his head into the room.  “Hey, Kev, what happened to ya?  The bus is late and Mom told Gary he had to drive us to school and he’s yelling to hurry up.”

Kevin slipped from her encircling arm and looked at her with pleading eyes.

She nodded.  “You go to school, and I’ll speak with Deputy Jones.  Be prepared, though.  We’ll talk about this when you get home.”

Her son bolted, sneakers pounding across the wooden floor, down a side aisle and through the front door, which he slammed shut behind him.

The bell jangled so hard, she thought it might fly off and break a window.

Kevin had done plenty to concern her lately, from smart-mouthing her and his teachers to acting the clown in class.  He would face the consequences eventually.  She would have to face her consequences right now.

Tanner started down the center aisle toward her.

Find The Sheriff’s Son at your favorite booksellers, including:

NEW! The book is now also available in a special Larger Print reissue, exclusively from Harlequin. Click here FMI and/or to order. 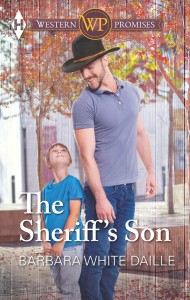