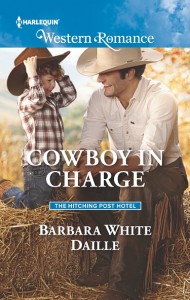 Single mom Layne Slater thought she’d seen the last of Jason McAndry when he chose the rodeo over her and their unborn son. Now Jason’s back in Cowboy Creek and just as handsome as ever. But Layne can’t give in to those feelings again. She has to protect her children…and her heart.

Jason wants to try to make up for the pain he caused when he left. The least he can do is help Layne while he’s home. Before long, Jason realizes he’s finally ready to be the husband, father and man his family deserves. But can Jason prove to Layne that this time, their love is forever?

He raised his fist again and rapped on the apartment door. The wood sounded hollow, just the way his chest felt—if you didn’t count his heart banging against his ribs.

Inside the apartment, a television’s volume dipped, then a little boy’s voice cried, “Mommy!” in stunned outrage. A second later, the doorknob rattled. The door swung open, and he stood staring at the girl he’d left behind.

The wife he’d left behind.

Her beautiful golden-brown hair had been pulled up and stuck every which way by a couple of plastic combs. Her skin was paler than he remembered, her nose glowed as red as the taillights on his truck, and her sky blue eyes looked as glassy and bloodshot as if she hadn’t slept for a week.

Those eyes… In this situation, most folks’ eyes would have widened in surprise. Instead, she blinked once and went blank-faced, the way she had always done when confronted with something that shocked or alarmed her. Right now, he imagined she had received a double dose of both.

“Jason?” Her voice came out in a croak. She reached up to rest her hand against the gaping neckline of her fuzzy blue robe.

The ragged tissue she held couldn’t hide the sight of creamy skin patterned with a few small freckles. The vision did more for him than a slip-sliding blouse or skin-tight leather. It also triggered memories and feelings he forced himself to push aside. This conversation would be hard enough. He didn’t need his body following suit. To combat the reaction, he took another deep breath and let it out. “Layne.”

She covered a rattling cough with her forearm. “What do you want?”

Though he should have expected it, he was taken aback by the belligerent tone. He hadn’t been ready for the question, either. Despite the long drive from Dallas, Texas, to Cowboy Creek, New Mexico, he hadn’t prepared much for this meeting. Big mistake. He sure couldn’t tell her he’d come back to make certain his son was in good hands. “I know it’s been a while—”

“A while?” She coughed again, then shook her head, most likely in annoyance at him. “It’s been almost four years since we’ve seen each other, and we’ve had no contact except filing for the divorce—”

“—which made the split permanent.”

“Legally permanent,” she said heavily, leaning forward as if to emphasize her point.

She kept coming. The quick glance he caught of her suddenly greenish pallor clued him in. She was halfway to unconsciousness and ready to drop.

As he caught her to him, the door behind her swung open. A little boy stood just inside the frame. And somewhere in the apartment behind the kid, a baby let out an earsplitting screech.